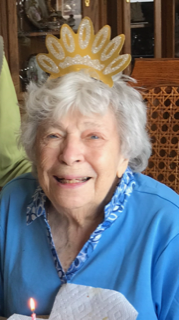 Please share a memory of Martha to include in a keepsake book for family and friends.
View Tribute Book

Martha was born in Hoboken, and orphaned at 4 years of age, where she was then raised in the Academy of Holy Rosary Villa in Union City, by the Nuns called Pallotine Sisters of Charity until 12 years old.

In her younger years she was involved in the Embroidery Industry, as a sample mender for Em-Tex, with her Bernina Mending Machine, in Times Square New York.  She worked on the 35th floor, where she could see the ball they used for the countdown on New Years Eve.

A lady with a heart of gold, Martha had a passion for gardening, always enjoying watching her plants grow into fruition.  She enjoyed walking along the Hudson River, listening to the water, where she would take a seat on a bench and watch the boats as they went by.  The end of not just a chapter, but the end of an era!

Survived by her three children, Rina Spinelli, Audrey Scheeler, and Edward Cecchini.  Predeceased by her husband Nelson in 2011

All arrangements were private by Tuttle Funeral Home, Randolph.  Tuttlefh.com.

A Memorial Tree was planted for Martha
We are deeply sorry for your loss ~ the staff at Tuttle Funeral Home
Join in honoring their life - plant a memorial tree
Services for Martha Coyle
There are no events scheduled. You can still show your support by planting a tree in memory of Martha Coyle.
Plant a tree in memory of Martha
Print
Online Memory & Photo Sharing Event
Online Event
About this Event