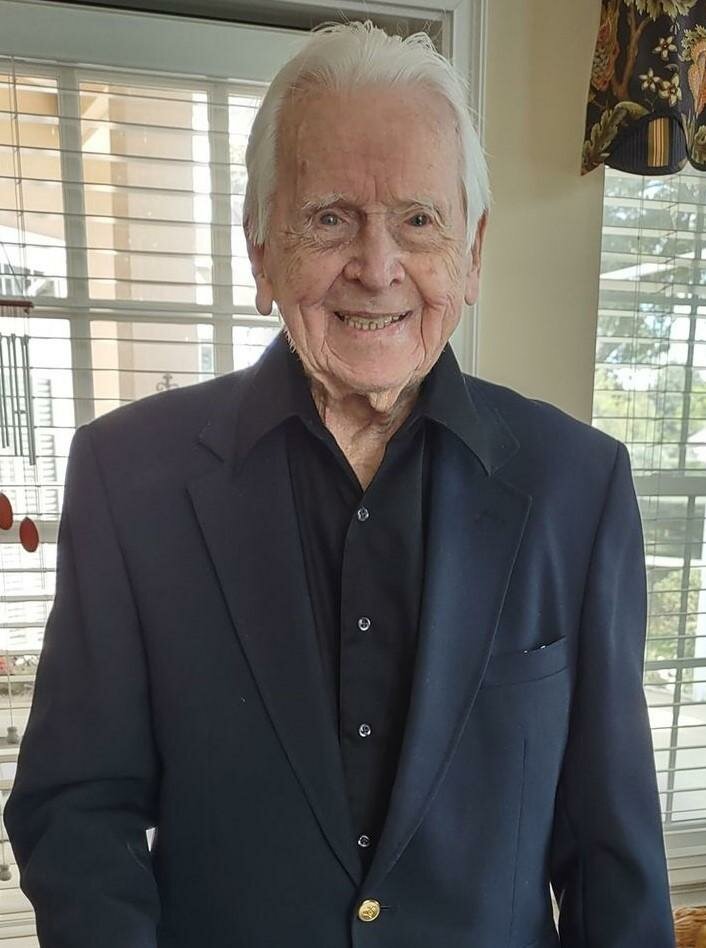 Please share a memory of William to include in a keepsake book for family and friends.
View Tribute Book

William John Tomka, 104, of Jacksonville died peacefully on September 7, 2022 moving happily from the’ hugs of the family to the arms of God.  His wife, Olga was waiting for him there and the Welcome Home Party was filled with music and singing.

Born in Dover, New Jersey, to Slovakian immigrant parents John and Anna Tomka, William spent his formative years working alongside his father and his mother running their General Store. During the Great Depression, William fondly remembered his parents for their generosity: giving food to starving families. In high school, teenage William lifted weights, developed a love of music, and learned German, a skillset that would soon be in high demand. He studied music at NYU and became a music teacher, but after only one year of teaching, he was drafted into World War II on July 11, 1941. He was appointed for “one year” of service as an English/German-speaking radio operator in the United States Army.

Deployed to Iceland as part of the 50th Signal Battalion, William served as a technical sergeant and led a group of eight radio operators. His team – responsible for code receiving and transmitting from the field – was part of the first American Army personnel to be sent in the European Theater of Operations.

After 22 months in Iceland, William was sent to be a part of the invasion force of France. At 6 am on D-day he lowered the back of the boat, stormed Utah Beach, then bravely fought through the entire campaign of Europe, including the American bombardment of the German forces at Saint-Lo and in the Battle of the Bulge. Decades later, he would begin to share his memories with his grandchildren. The bullets that just missed him. The Nazi captain hiding in a closet. The German motorcycle he stole. The frigid Ardennes forest in January. The bodies of Holocaust victims.

On June 22, 1945, after almost four years of war, Mr. Tomka returned to New Jersey and did the unthinkable: he lived a beautiful life. He returned to teaching, earned a master’s degree at NYU, married the girl who typed his papers, sang in numerous choirs, raised three successful children, built multiple houses as well as a successful high school music program. Beginning with only 30 band members, William Tomka grew the Ridgefield High School music program to 108 members and even performed in Venezuela in front of the Governor.

In retirement, he traveled the world with Olga, enjoyed bowling, collected rare coins, brought his grandchildren to the Jersey shore, won countless games of Rummikub, made his grandchildren laugh, watched MLB baseball, sang in choirs, wrote letters to his great grandchildren encouraging discipline and excellence, joined his church’s orchestra, and played multiple musical instruments. Even at 100 years old, he put on a “private Exhibition”  for his birthday guests, expertly singing and playing the clarinet, violin, and piano.

Congress lauded him as a “true American hero.”  Jacksonville honored him in Veteran’s Day parades and he was celebrated at the owner’s sky box at the Jaguars football stadium.  He lived a large, colorful life!

But those closest to him will remember William Tomka as their personal role model, a man who inspires us to work hard, overcome adversity, sacrifice for others, learn with zeal, love with action, and leave behind a melody that others want to learn.