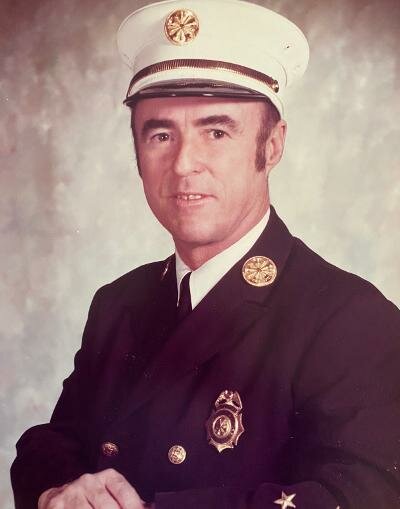 His loss will be felt not just by the family he leaves behind, but by so many from the town of Dover who knew him, worked with him, and loved him over the years. His life, his story and his memory are like powerful electrical currents rippling through the town’s history.

It all began 91 years ago when Paul was born in Scranton, PA in the middle of the Great Depression (May 1, 1930), to Joseph and Margaret (Smith) Sullivan. He was the third of seven children in an Irish-Catholic household, so he quickly learned the importance of family, but even more so, the importance of having a sense of humor. He had a great big heart and loved to share a laugh with people.

However, it was in Dover where Paul grew up and spent most of his formative years doing the things kids did in the late 1930s and early 40s. Like swimming in the Rockaway River, or climbing up tall trees, or sneaking off with his pals to ride their bicycles to see the Statue of Liberty some 30 miles from home.

After being punished by his parents for that bicycle trip (and a multitude of other minor, but hilariously memorable infractions), Paul attended Dover High School. During junior year English Class, he took special notice of a young woman named Gladys Schwind seated next to him. She was smart, she was sweet, she was sincere, but most importantly, when he saw her, sparks began to fly. The two soon began dating during their last years of school together.

In 1950, Paul graduated Dover High School and then served in the U.S. Naval Reserve for 8 years during the Korean War. After high school, Paul also went to work for Jersey Central Power & Light in Dover, where he was introduced to (and found his calling in) the electrical trade. After four years at JCP&L, Paul started his own business and became a licensed independent electrical contractor.

Shortly after, he married the love of his life, Gladys, on September 3, 1955. They had a joyous, adventurous life together – filled with love, laughter, and lots of kids. They had 4 children: Paul, Patricia Ann, John and Robert. Paul loved his family deeply – and enjoyed nothing better than spending time together. Whether at holiday get-togethers or camping across country, he and Gladys created unforgettable memories that live on in the hearts of all their children. Paul was also a caring grandfather to his 5 grandchildren (Brittany, Eric, Hayley, Jenna and John) and he and Gladys just celebrated their 66th Wedding Anniversary this past September.

As owner/electrical contractor, Paul supported the town of Dover, its residents, and populations from neighboring areas for decades. He successfully ran his business by “word of mouth from happy customers” as his sole method of advertising. He was a wonderful electrician and had the uncanny ability to solve even the most complex issues. He was kind and generous and helpful to anyone in need and he made himself available to all his customers.

Paul was also Dover’s Town Electrician for multiple decades. He helped power the beautiful Christmas displays on Blackwell Street and Commons, prepare the lighting and audio for Fourth of July Fireworks celebrations, handle all Traffic Signal installations and repairs, and wire the lighting for ice skating at Crescent Field. He also installed the first electrified Score Board at King Field and provided an array of electrical services for Water Works Park, Dover Library, Dover Police Department Headquarters, Water Department Buildings, and so much more. Paul was a member of the International Brotherhood of Electrical Workers (IBEW) for 65 years.

In addition to his family and career, Paul felt a deep sense of obligation to serve his community. To this end, he proudly joined the Dover Volunteer Fire Department in 1959 (Engine Company #2). He held the ranks of Lieutenant, Captain, then President, Assistant Chief, and finally Chief of the Department, serving in this capacity during America’s bicentennial in 1976. He was also a member of both the Morris County Fire Chiefs and NJ State Fire Chiefs Association.

Paul was also distinguished as one of the Descendants of the Signers of the Declaration of Independence, whose ancestor John Hart was a NJ delegate to the Continental Congress in 1776. Paul was also a member of the Dover Historical Society.

In addition, Paul was a lifetime member of the Benevolent Order of Elks. He was with the organization for 57 years (Dover-Lake Hopatcong branch).

Paul also enjoyed fishing and the Jersey Shore and telling a good story.

Paul is survived by his wife Gladys, his 4 children (Paul, Patricia Ann, John and Robert) and their spouses, as well as 5 grandchildren (Brittany, Eric, Hayley, Jenna and John). Paul is also survived by his loving sisters (JoAnne Beliveau and Geraldine Abrusia).

He was preceded in death by his parents, Joseph and Margaret, and his siblings, Anne, Joseph, Patricia and William.

In lieu of flowers, the family asks that donations be made in Paul’s name to the Dover Volunteer Fire Department, 209 N. Sussex Street, Dover, NJ 07801.