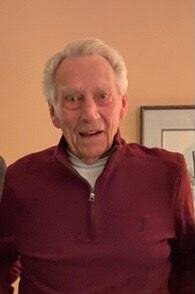 Walter was born on December 29, 1923 in Randolph, NJ to Roy E. and Frieda Pugsley and lived his entire life in Randolph, living on the same street in the house he built in 1948.

Walter graduated from Dover High School in 1941. He served in the U. S. Navy from December of 1942 to February 1946. He was an Aviation Machinists Mate, Assistant Flight Engineer serving in England during WWII chasing German submarines. Walter took up the family trade and was a mason/bricklayer. He was a member of Bricklayer and Masons Local 37 in Dover and worked for Paul Otto Building, Mendham for most of his career, serving as site supervisor for many large construction projects.

Walter married the love of his life, Patricia M. Anderson in October 1946. They had two children (Michael, infant deceased 1948, and Linda). They shared 47 years together. Patricia predeceased him in 1993.

Walter was a lifetime member of Randolph Township Fire Department serving from 1953 with Chemical Engine Co. No. 2, Millbrook. He was an avid golfer, playing his game into his 80s and was a founding member of Windy Valley Golf Club out of Flanders Valley Golf course. He enjoyed hunting and was a collector of Civil War guns.

Visitation will be Friday, October 15, 2021, from 3-7 pm at Tuttle Funeral Home, Randolph (Tuttlefh.com).  A Funeral Service will be held on Saturday, October 16, 2021, at 10:00 AM at the funeral home with Interment following at Pleasant Hill Cemetery, Randolph.

In lieu of flowers memorial donations may be made to Randolph Chemical Engine Company #2, 340 Route 10 East, Randolph, NJ 07869