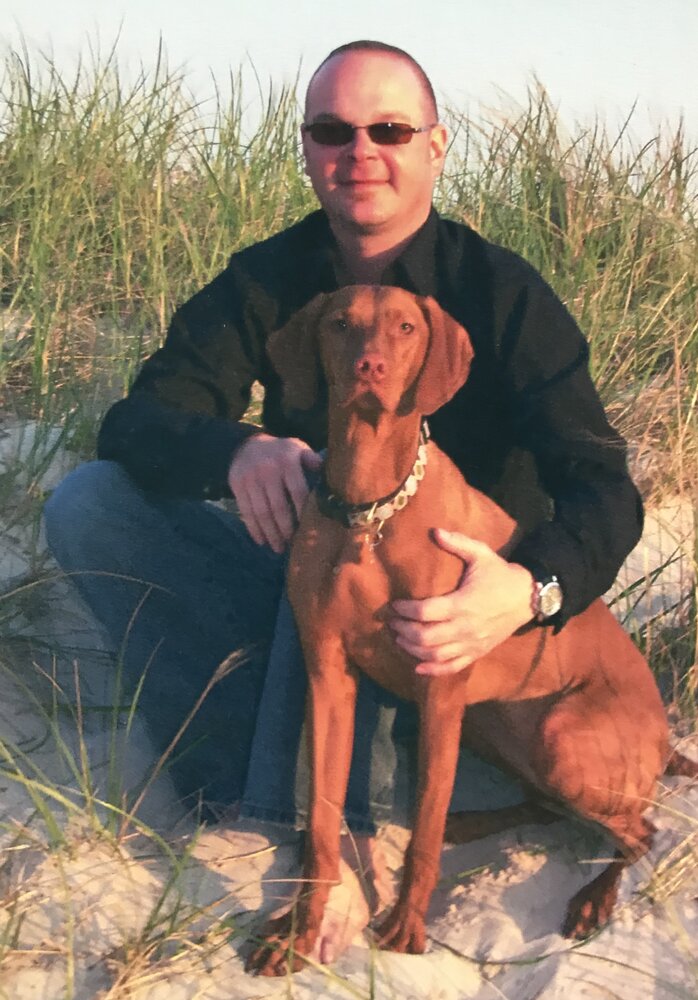 James Jeffry Gieber, loving son, brother, uncle, and fiancé, passed away on Saturday, October 2, 2021. Jimmy, as he was known to his family and friends, was born in 1969 to Jim and Nancy Gieber in Piscataway, NJ. At the age of 3, his family moved to Randolph, NJ where he spent his formative years.

The seeds of Jimmy’s love of building and engineering were sown when every year he and his father would work together to build a small, weighted car that they would enter in a yearly father/son derby, happily winning a ribbon or two over the years. His fascination with tinkering grew even more during trips out to the family’s farm in Kansas where he ran around with his grandfather, fixing all sorts of machinery and tractors. Later on, using his acquired knowledge, and through sheer grit and determination, he managed to restore a discarded lawn mower to earn money by mowing his neighbors’ lawns (one of which was probably the neighbor he got the lawn mower from).

During his years at Randolph High School, Jimmy was a four-year soccer player and was active in Resurrection Parish’s youth group. Summers were spent working at Shrink Packaging Systems Corp (SPS), a business co-founded by his father, shortly after Jimmy was born. As a toddler, Jimmy would zip his toy cars along the floor in the office while his father was on the phone helping customers. He was destined, years later, to study Packaging Science at Rochester Institute of Technology (RIT).

Upon graduation from RIT, Jimmy returned to SPS where he started using his middle name, Jeff, to differentiate himself from his father. Right out of school, Jeff was given the responsibility of opening SPS’s New York branch in the Rochester area where he worked to establish the company’s footprint and strengthen relationships with challenging accounts. He then returned to New Jersey to help run the Edison operation with his father and oversaw a major account, which he managed through a plant fire that destroyed all of their packaging equipment.

More recently, Jeff jumped into action to open the first Pennsylvania warehouse in a former grocery store.  He helped to clean, remodel, and staff the new location, which is now SPS’s largest. For many years he was an active part of the management/leadership team, helping to craft the strategies that have led to the last decade of profitable growth for SPS.

Jimmy will always be remembered for his kindness, generosity, and sense of humor. Many friends, including those with four legs, benefitted from his big-heartedness. He was known for the wonderful themed parties and dinners he hosted over the years, covering everything from birthdays to Halloween. Jimmy had a number of talents, including sports (especially soccer, golf, and its equally difficult counterpart, frisbee golf), building, and design. He loved the beach, restoring antique pick-up trucks, his family, his fiancé, and his late beloved Vizsla dog, Abby.

James Jeffry is preceded in death by his father, Jim and his grandparents on his father’s side, Alvena and Bernard, and Verna and Carl Thielen on his mother’s. He is survived by his fiancé, Christy Edwards; mother, Nancy; brother, Kal Gieber of Belmont, MA; sister, Kris, and brother-in-law, Ken Buddendorff of Mt. Dora, FL; and his nieces and nephew Julia, Ben, and Lauren Buddendorff. He is also survived by his beloved aunts, uncles, and cousins in Kansas.

Visitation on Wednesday October 6, 2021 from 4:00PM - 8:00PM at Tuttle Funeral Home, Randolph (Tuttlefh.com), with eulogies begining at 7:00PM.  Funeral Mass 10:00AM on Thursday October 7, 2021 at Resurrection Parish, Randolph.  Interment at St. Joseph's Cemetery, Dorrance, Kansas.  In lieu of flowers, donations in his memory may be made to Habitat for Humanity (https://www.habitat.org), ASPCA (https://www.aspca.org), or Tunnels to Towers (https://t2t.org