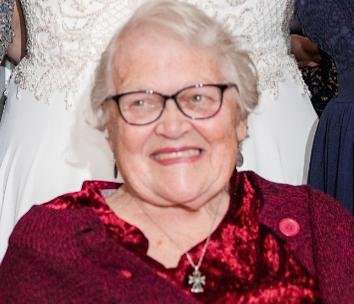 Mazie Stefanovic 86, passed away on Saturday, June 19, 2021, at St. Clare’s Hospital, Dover.  She was born in Bronx, NY and was a resident of Stanhope.

Mazie began her career as a “Cafeteria Lady” as they were affectionately known in the Randolph school system.  After working there for several years, she moved to the Guidance Office as a secretary.  She continued her secretarial career at Storch Engineers and Horizon Bank.  At the time of her retirement, she was a secretary for the Morris Knolls Adult school program.

She was a member of Millbrook United Methodist Church in Randolph where she was a past member of the Women’s Society and choir.  She loved to knit and crochet, she also belonged to St. Andrew’s Greek Orthodox Church’s knitting group.

She is predeceased by her husband Milan A. Stefanovic, 1987.

In lieu of flowers donations in her memory may be made to a local animal shelter.

Services for Mazie Stefanovic
There are no events scheduled. You can still show your support by planting a tree in memory of Mazie Stefanovic.
Visit the Tribute Store
Print
Share A Memory
Plant a Tree