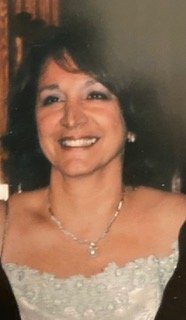 Please share a memory of Eugenia to include in a keepsake book for family and friends.
View Tribute Book

The falling asleep of the Foundation of the Sedereas Family + Eugenia Sedereas.

It is with great sadness, that we inform you that Eugenia Sedereas, 68, passed away on April 12, 2021 in Randolph, New Jersey. May her memory be eternal.

On April 4th, 1953, Eugenia was born in the small village of Fyta, Chios, Greece, to John and Despina Gatanas.  When she was 4 years old, it was decided the family would immigrate to the United States for a better life and greater opportunities.  One of her earliest memories was leaving Fyta by donkey with their belongings to begin their journey.  When first arriving in America, they lived in Warren, Ohio, before moving to West New York, New Jersey.  Eventually they settled in Astoria, New York, where her father entered the restaurant business and Eugenia attended Bryant High School.

Shortly after her graduation, Eugenia met her one true love, Costa.  Their courtship was quick, as they were deeply in love, and married, Thanksgiving Day, 1971.  They would eventually settle in Randolph, NJ, where they raised their children, Peter, Katie and Steven John.

Together Costa and Eugenia operated the Townsquare Diner since 1987.  They were a tremendous team, as they were able to balance the work/family dynamic.  Eugenia was Costa’s rock, and she always supported his decisions.  At home, Eugenia and Costa stressed family values, education and the Orthodox faith.

Eugenia always said, “to love your children, and make sure they know it”.  She provided selfless, unconditional love to her children, and the freedoms for them to grow into the people that they have become today.  She could be heard many times saying how proud of what her children had become.

In January of 2019, Eugenia and her family were dealt a major setback, it was learned she had Stage 4 Colon Cancer.  This diagnosis would not stop Eugenia from living her life and doing what she wanted to do.  Although she endured several surgeries and procedures, Chemotherapy and Immunotherapy treatments, as well as some cutting-edge cancer therapies, Eugenia still would have her Family Sunday Dinners, travel to Florida, do her gardening at home and at her beloved St Andrew Greek Orthodox Church.

But most impressive is that Eugenia would still go to work each and every day at the Diner.  She would not let cancer slow her down.  She endured all with such bravery and was an inspiration to so many.  Eugenia proved she was a strong-willed woman.

Eugenia has left behind an enduring and loving legacy, knowing that she has helped those around her to live full and accomplished lives.  Eugenia will be missed by all that she has touched, and in her final weeks, she was moved by the love and support of so many family and friends who came from near and far to show their love to her.

Eugenia is survived by her husband Costa, 3 children, her son Peter and wife Diana, her Daughter Katie and husband George, her son Steven John and his wife Stacey; grandchildren, Venia, Constantine, Despina, Fotine, John, and Samantha Eugenia; her siblings, Jimmy, Mary and Sophia; and Eugenia leaves behind a beloved extended family and friends.  Eugenia was predeceased by her parents John and Despina Gatanas.

Wake will be held on Thursday, April 15th from 3-7pm at Tuttle’s Funeral Home on Route 10, Randolph, NJ

Visitation will be held on Friday, April 16th, from 10:00 AM – 11:00 AM at St. Andrew Greek Orthodox Church, Randolph, with a Funeral Service at 11:00 AM also at the church. Interment to follow at Restland Cemetery, East Hanover.  Immediately following will be a repass luncheon at the Hanover Manor.

In lieu of flowers, donations in Eugenia’s memory can be made to St. Andrew’s Greek Orthodox Church Website: https://www.standrewgonj.org/ and choose PayPal / online WeShare   All arrangements by Tuttle Funeral Home 272 Route 10, Randolph (www.tuttlefh.com).

COVID protocols will be followed.