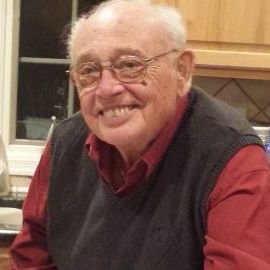 Obituary of Robert U. Dagna

Robert U. Dagna, age 89, passed away peacefully on November 29, 2020 at the VNA Hospice at St. Clare’s Hospital, Dover. Son of Stefano and Palmina Dagna who emigrated to New York from the Piedmont section of Italy.  He was born in Corona, NY and grew up in an Italian neighborhood but never learned to speak Italian, since his parents wanted him to be American. He received Bachelor’s & Master’s degrees in Mechanical Engineering from City College of NY, and continued graduate studies at Hofstra & NJIT.  He served in the U.S. Army in the Corps of Engineers.  He worked at Sperry Gyroscope when he met his wife, Anna, who had moved to NYC from PA.  They lived 3 years in NY when he was offered a job at McKiernan-Terry in Dover, NJ.  They then became suburbanites. He was a Registered Professional Engineer (PE) in NJ.They moved to Morris Plains and later to Randolph, where they lived for 30 years, before moving to an active retirement community in Rockaway where they enjoyed the many activities, including the Italian Club where he served a term as president.  They enjoyed travelling and he especially enjoyed cruises.

He is survived by his wife of 62 years Anna (Schaeffer); his daughter, Jennifer & husband James Tunnicliffe & children, Zoe, Liam, & Peter, and his son, Stephen & son, Austyn.  All who live nearby.  He was predeceased by his older brother, Joseph.

Due to the Covid-19 restrictions, a private funeral will be held at the Tuttle Funeral Home, Randolph (www.tuttlefh.com).

In lieu of flowers, donations may be made in his name to either the VNA of New Jersey, https://www.vnannj.org/donate.html. Alternatively, you can call Diane Myers at 973.451.4148 and make a donation via phone or send a check, made payable to, Visiting Nurse Association of Northern NJ, Attn: Diane Myers, 175 South Street, Morristown, NJ 07960 or The Rockaway Township Fire Department & Rescue Squad, 65 Mt. Hope Road, Rockaway, NJ 07866.