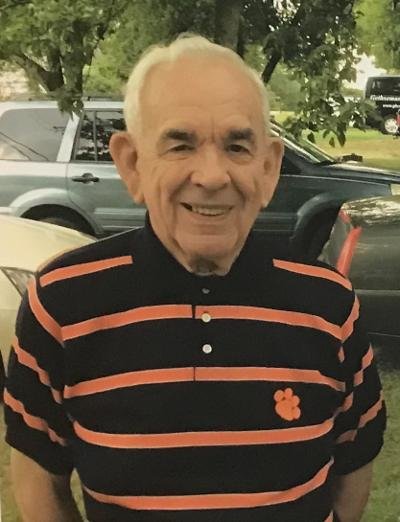 David was born and raised in Whitmire, South Carolina, the third of fourteen children.  He graduated from Clemson University in 1952 and was appointed Second Lieutenant, Ordinance Corps in the United States Army where he served eight years in Artillery.

In 1960, after his tour in Korea as Captain, David was honorably discharged and began his 34-year Civil Government career at Picatinny Arsenal, retiring as Chief of the Technical Publications division in 1994.

David was a devoted family man, a loyal husband, a wonderful father and an exceptional grandfather that adored his grandchildren.  He was an avid fan of Clemson football and enthusiastically supported his alma mater.

Visitation will be at Tuttle Funeral Home in Randolph on Sunday, November 15, 2020 from 2-4 pm.  A funeral mass will be held at Sacred Heart Church in Dover on Monday, November 16, 2020, at 1 pm.  Interment will follow at Saint Mary’s Cemetery in Wharton.

In lieu of flowers, donations may be made in his memory to either Atlantic Hospice, 33 Bleeker Street, Milburn, NJ 07041 or Running Strong for American Indian Youth, 8301 Richmond Highway, Suite 200, Alexandria, VA 22309.