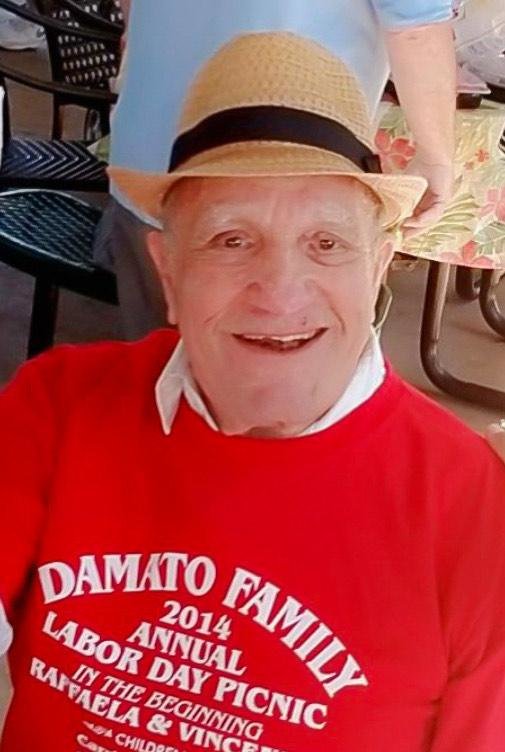 Anthony Damato, 94, of Randolph, passed away on Tuesday, January 14, 2020. Anthony was born July 22, 1925. He served in the Coast Guard during World War II. Dad was self employed in his company, Damato Brothers. He was a multifaceted contractor with lots of equipment. He managed to cheat death often on the yellow avenger, his bulldozer. He once rode the bulldozer up a stair case in a house he was demolishing, it collapsed, and lived to recount the story without a sweat. Worry was not in his nature, he just got the job done. He semi-retired in 1991. Spending his time between N.J. and Florida. What a glorious life my dad lived. Consistently happy with no attachment to material possessions. He lived with me after my mom died in 1991 and enjoyed the company of my children. He was so much fun always ready for a new adventure. He taught all my children to play cribbage, and attended their sporting events. He loved family time. On Sunday mornings he would rise at 6am to keep my husband, Benje, company on their regular trip to Home depot, followed by a trip to Costco. They returned home by 10:30am to make breakfast for the waking gang. Whatever, Benje was making he was eating, never a complaint about food. My children and my husband adored him it was a mutual admiration society. Dad came from a big loving family, 14 brothers and sisters, 8 daughters, 6 son's. His mother had raised them all to be close and every year he delighted in the annual family picnic which his mom started after WWII. Everyone would come with their spouses and children. Dad picked and brought 100 ears of corn for all to enjoy. He helped anyone and everyone, family, friends, neighbors. Normally without having to be asked. He just pitched in. Dad had lots of interests. Most included gambling. He regularly went to OTB, Atlantic City, and the race track. My friends often joked that my kids would be the only ones in kindergarten who knew how to throw dice, shouting seven come eleven. He drove to Florida every winter until he was 85. Rising early to get a good start on the day he would take side trips on the way down. Stopping at five for cocktails and dinner. He and a friend drove across country without reservations or a plan. They visited the national parks and stayed wherever. He lived in the moment as few people do. His most important quality was his big heart filled with love, which he gave generously. We will miss him but in his new place I'm sure he's the life of the party. He leaves to morn his only child, Rita Tabatchnick, predeceased by son-in law, Ben Tabatchnick, grandchildren Jason, Alexander, Anna and Ruth. Survived by his sister Rose LaPierre. Predeceased by his six brothers, and eight sisters. He also leaves four generations of nieces, and nephews. Memorial Visitation on Sunday, January 19, 2020 from 11:00AM -12Noon followed by a 12 Noon Memorial Service at Tuttle Funeral Home, Randolph (Tuttlefh.com). In lieu of flowers, donations to Holy Apostles Soup Kitchen, 296 Ninth Ave., NY, NY 10001 holyapostlessoupkitchen.org
Print
Sunday
19
January