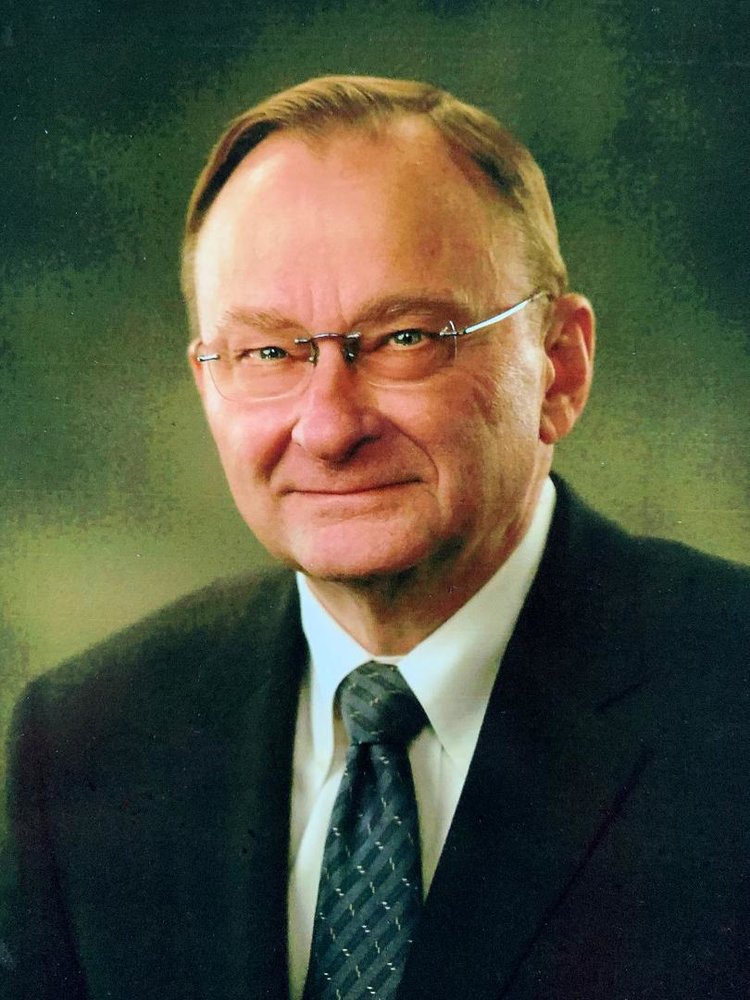 James Gieber, loving husband, father, and grandfather, passed away Wednesday, November 6, 2019 after a long illness. Jim was born in 1939 to Alvena and Bernard Gieber in Marysville, KS and raised on the family farm in Belleville, KS. He was a proud alumnus of Kansas State University where he entered the ROTC, sang in the K-State Men’s Glee Club, and was a member of the Delta Sigma Phi fraternity. One day while outside the fraternity house he noticed a young woman walking by; when he saw her again at the K-State Catholic Newman Club, he asked her out on a date. That lovely young woman, Nancy Thielen, became his devoted wife of 57 years. Prior to graduation, Jim was called to serve in the Kansas National Guard stationed at Fort Riley. He went on to attend the US Army Ordnance School at Aberdeen Proving Ground in Maryland eventually earning the rank of First Lieutenant. He was honorably discharged from the Army and returned to Kansas State University to finish his Mechanical Engineering degree. After graduation, DuPont offered Jim a position in their cellophane plant in Clinton, Iowa. While there, he asked to visit the new polyolefin division to see the first extrusion of an amazing new technology. His work with this new technology helped to further develop shrink film as it is known today. This eventually led Jim and his young family to the east coast where he worked at DuPont’s main headquarters in Wilmington, DE and later in the Empire State Building in New York City.

In 1970, Jim left DuPont to co-found Shrink Packaging Systems, a company dedicated to better serving the customers and their unique packaging needs. The work at SPS led to several patents in the development of new technologies furthering the growth of the packaging industry. In 2013 Jim and SPS were awarded the Bemis Clysar Distributor of the Year award at the Pack Expo in Chicago. He was a charter member of the National Independent Packaging Association (NIPA) and served on the Advisory Council for Lantech, a leader in the industry. In 2011, he was named an Alumni Fellow of Kansas State University’s School of Engineering. Jim’s faith has remained a priority throughout his life. He and Nancy were part of the founding families to build Randolph’s Catholic community church, Resurrection Parish.

Jim is preceded in death by his parents Bernard and Alvena and brother Paul Gregory. He is survived by wife Nancy; sons Kalen Gieber of Belmont, MA and Jeff Gieber of Monmouth Beach, NJ; his daughter Kris (Ken) Buddendorff of Mt. Dora, FL; brothers Maurice (Barb), and Gerald of Belleville, KS; and his beloved grandchildren: Julia, James, and Lauren Buddendorff. He is also survived by numerous nieces and nephews in Kansas.

Jim had a love for life and his family.  He loved to travel and see as much of the world as he could. His positive attitude in all situations was a true inspiration and he brought joy to so many people. He will be missed by all!

A prayer service and Eulogy will be included which will take place starting around 7pm.

In lieu of flowers, donations in Jim’s memory can be made to Post Rock Opportunities Foundation at postrockfoundation.org or the National Kidney Foundation at kidney.org/support.