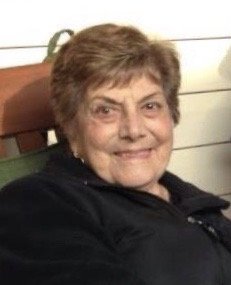 Caroline Calantropio, 97,  joined her husband Louis in eternal life on Wednesday, October 9, 2019. She passed away peacefully at Morristown Medical Center, after a short illness, surrounded by her family. Caroline was born on January 24, 1922 in Brooklyn, New York.  She grew up there in a large Italian family, with her one brother and 3 sisters.  After graduating high school Caroline became a Beautician, a career she continued until her retirement in the mid 1980s.  While growing up in Brooklyn she met and was courted by Louis, a young man living not far from her.  When he couldn’t see her in person Louis would leave Caroline little love notes and packets of Indian nuts at the local candy store which both frequented.  They were wed on July 5, 1942, a marriage that would last 73 years until Louis’ passing in 2015.  Louis and Caroline moved from Brooklyn to Cedar Grove, New Jersey in 1951, the first of both families to migrate.  They lived in Cedar Grove until 1986 at which time they moved to Holiday City, a senior citizen complex in Toms River.

Caroline enjoyed playing bocce and was an active member of the Italian-American Club. She loved to crochet things for gifts, as well as work on a variety of crafts.  She was an excellent cook and enjoyed sharing her recipes, which will live on in her children and grandchildren.   As she grew older she loved spending time with her ever expanding family.

Caroline was the last surviving member of her original family. She is survived by her 4 children and their spouses, James and his wife Maureen, Steven and his partner, Adele Castaldo, Marianne Kendelski, and Michael and his wife Mickey.  She is also survived by nine beloved grandchildren and their spouses, and 14 cherished great grandchildren.  She was pre-deceased by her husband, Louis and a granddaughter, Melissa.

Caroline’s Wake will be held on Monday, October 14, 2019 between the hours of 2:00PM and 6:00PM at Tuttle Funeral Home, 272 State Route 10, Randolph (www.tuttlefh.com).  The Funeral Service will be held at the funeral home at 5:30PM.  Caroline will be buried with her husband in a private ceremony at the Brigadier General William C. Doyle Memorial Cemetery in Wrightstown, NJ.  In lieu of flowers, the family requests donations to St. Jude’s Children’s Research Hospital, Memorial and Honor Gifts, P.O. Box 1000 Dept. 142, Memphis, TN 38148-0142. Caroline often donated to St. Jude’s.