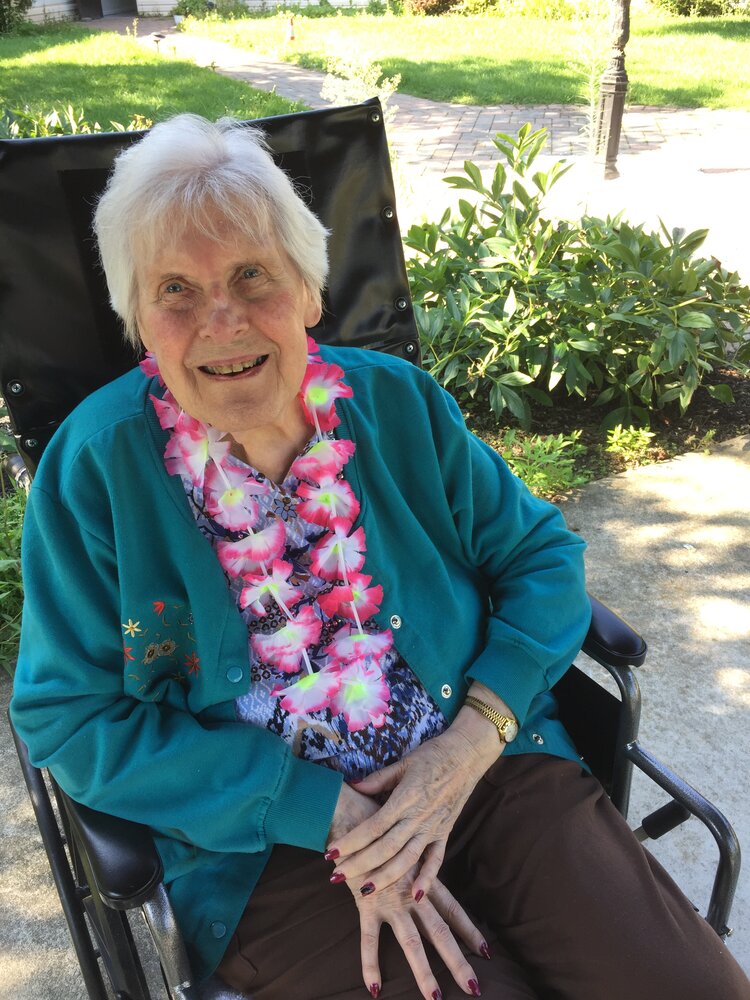 Please share a memory of Edith to include in a keepsake book for family and friends.
View Tribute Book

Edith Thelma Sellmann, nee Holmberg, formerly of Randolph, NJ passed away on Saturday, June 11, 2022, at the age of 92.

Thelma was born on November 4, 1929, in Brooklyn, N.Y. to Karl Albert and Edborg (nee Nilson) Holmberg.  She was baptized into the Christian faith on February 9, 1930, at the church of the Good Shepherd, Brooklyn, N.Y. and later confirmed her faith on April 18, 1943, at Our Savior Lutheran church in Fairlawn, N.J., where she also married John Jacob Sellmann on June 26, 1954.

After graduating from Fair Lawn High School in 1945, Thelma went on to earn her Bachelor of Arts Degree in Elementary Education from Upsala College, in 1950.

Thelma taught for over 30 years and devoted her life to serving others, particularly children.  She taught every grade except kindergarten and was particularly known for having an end of year class picnic at her house.  She volunteered her time as a director of the Sunday School at Lutheran Church of Our Savior, Stanhope, NJ for over 20 years. She and her husband, John, operated the Handyman’s Tool Shop in Randolph for over 25 years.

Thelma was very active in the community.  She was the chairlady of the Community Services Committee in Randolph, read to the students at Fernbrook elementary school, trustee of the Historical Museum of Old Randolph, past president of Randolph Seniors Club, Literacy volunteer of Morris County (5 years), College Club of Dover (past president 1999-2003), and belonged to the NJREA, NJEA and MCREA.

Thelma was a member of the Lutheran Church of Our Savior, Stanhope, NJ.  Past president of Sunday School, Former supervisor of Vacation Bible School, past president of Ladies Guild, and active in senior choir.

Thelma was married to John almost 51 years.  She and John organized the Harmony Rd. neighborhood picnic for many years.  She taught in Randolph Township for 28 years, and in Ramsey, NJ and Scott Township and Espy, PA prior to that.

Family and faith were extremely important to her.  Thelma was a mother of three.  Firm but compassionate, Thelma valued spending time with her family, particularly her many grandchildren.  She will be remembered as a loving mother and guide, as well as a generous and encouraging grandmother who gave generously and supported her grandchildren as they began their career paths.  She always stressed getting a good education.

Thelma enjoyed collecting orchids and reading books.  Together with her husband, John, they had a deep appreciation for our national parks and the wildlife within them, visiting national and state parks across the country.  Thelma never hesitated to support the causes she believed in.  over a span of 12 years, they took 8 of their grandchildren across country to Idaho, Montana and Washington state and visited several parks.

She was preceded in death by her husband, John; her parents; her sisters, Ruth and Barbara; her brothers-in-law, Carl, Bill, David, George and Gilbert; her sisters-in-law, Ingrid, Anne and Margot; her nephew, Robert and her daughter, Barbara.

Interment will be private.

In lieu of flowers donations can be sent to the Lutheran Church of Our Savior, 143 Brooklyn Rd., Stanhope, NJ 07847