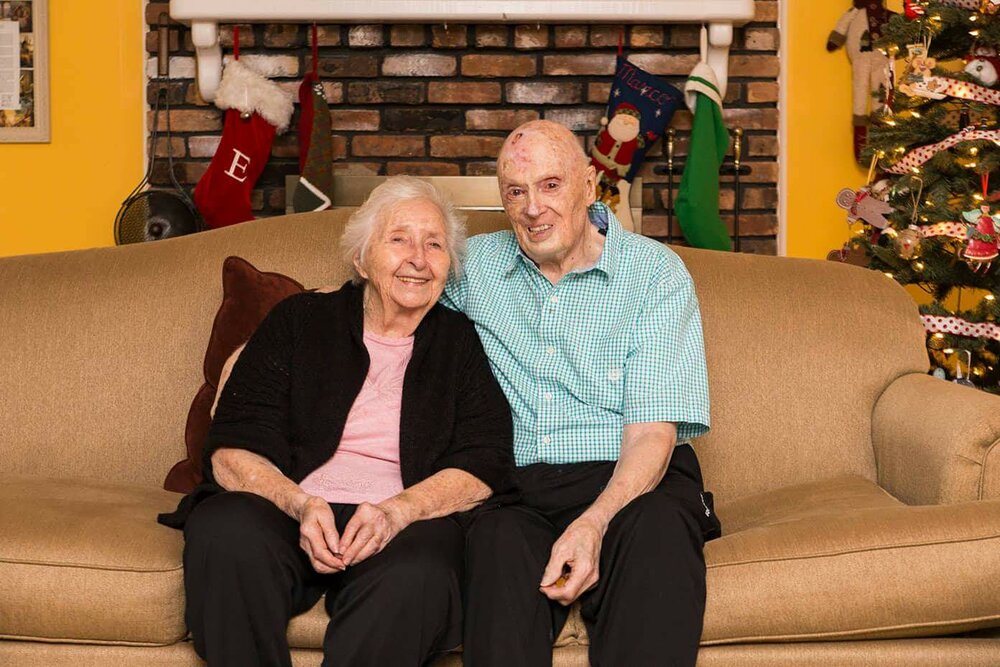 Please share a memory of Joan to include in a keepsake book for family and friends.
View Tribute Book

Joan was the oldest girl and as such helped her mother with her siblings, which is probably where she learned to be such a good sister, wife, mother, and granny.

Joan’s father worked on the railways, and the family lived in Broken Hill (Kabwe) and Northern Rhodesia (Zambia), before moving to Gwelo (Gweru), Southern Rhodesia (Zimbabwe).

By the time Joan was sixteen, she had completed high school and was working. One evening, she went to a roller skating get together at Thornhill Air Force Base. It was there that she met the love of her life and companion for sixty-seven-and-a-half years: John Robert Breakwell.

Before Bob was sent to the Middle East on assignment, he wanted to get engaged to Joan, but her father said no; Joan would have to wait until she turned twenty-one. Bob and Joan wrote to one another for three years before they became engaged, and Bob sent Joan an engagement ring through the mail.

When it was time for Joan to reunite with Bob, Joan traveled to Durban, South Africa, so she could catch a ship to England. She sailed on a Dutch freighter around the Cape of Good Hope and up the coast of Africa to England, where she lived with Bob’s family until Bob was able to return to England.  Bob and Joan were reunited and married in Long Eaton, Nottinghamshire, on June 19, 1954. They welcomed their first son, Jonathan Michael (Mik), whilst living at Spittlegate military base.

In 1956, Bob and Joan set sail back to Africa. They then travelled by train up to Salisbury, Southern Rhodesia (Harare, Zimbabwe), where they lived until they were stationed back in Gwelo. In Gwelo, they welcomed their daughter, Jeanette Ruth, and son, Donald Philip.

In 1963, Joan lost her father in a car accident. In 1967, Bob and Joan moved their family into a home Joan’s father had built. The family lived there until 1970.

In 1969, Bob was in a horrific accident where he was terribly burned. Joan left the family with her mother in Gwelo and went up to Salisbury, where she was by Bob’s side constantly as he recovered. It was a difficult time for all, with Joan in Salisbury helping the nurses and especially helping Bob as he dealt with the emotional and physical scars that came with the accident.

The family moved to Salisbury, and there the family adjusted to living in a big city. The family joined the Church of Jesus Christ of Latter-day Saints in 1971, and Joan served in many capacities within her local and regional congregations.

Bob and Joan moved to the United States in 1985, joining their daughter and her family, the two families uniting to become one and living together until the time of Joan’s passing. Joan lived in Utah; Oregon; California; and, finally, New Jersey.

Joan was a loving, giving, and patient person. Her family adored her. Joan was the peace maker and the glue that held the family group together. She went through a great deal of physical pain in her life, but did so with an amazing stoicism. She was a true lady who loved every family member with all her heart. She was so proud of all they did and loved to tell everyone about their accomplishments.

Joan passed peacefully at home on March18, 2022, with Don and Jeanette by her side. Joan will be missed greatly by all who had the joy of knowing her, especially her family. She is survived by her son Mik (Wendy) in Seacroft, Leeds, UK; daughter Jeanette Nielsen in Succasunna, New Jersey, USA; son Donald (Aleta) in Provo, Utah, USA; and by 9 grandchildren and 20 great grandchildren.

A Memorial Tree was planted for Joan
We are deeply sorry for your loss ~ the staff at Tuttle Funeral Home
Join in honoring their life - plant a memorial tree
Services for Joan Breakwell
There are no events scheduled. You can still show your support by planting a tree in memory of Joan Breakwell.
Plant a tree in memory of Joan
Print
Online Memory & Photo Sharing Event
Online Event
About this Event