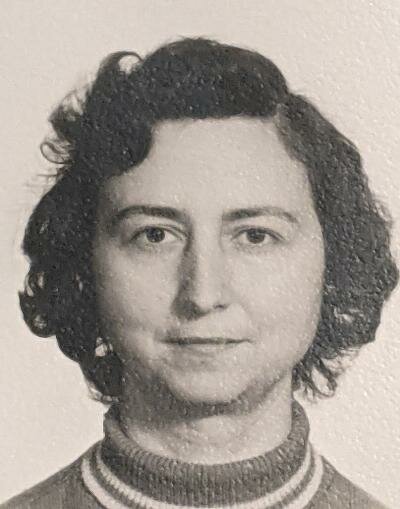 Please share a memory of Pauline to include in a keepsake book for family and friends.
View Tribute Book

Pauline Seretis (Raptis), 89, passed through the narrow gates into paradise Monday, 12/6/21, at Woodland Nursing Home, Andover, while battling dementia. She joins her late husband, Fotis (“Frank”) Seretis, parents, Pericles and Spyridoula Raptis (Theofanis), brothers Gregory and Demetrius Raptis in heaven. Born on March 14, 1932 in Nafpaktos, Greece, she endured tough times as a child that personified her resilient, selfless identity, filled with empathy and compassion for others. She was a long time resident of Dover and Ledgewood, NJ.

She grew up during World War II, displaying the true Greek spirit of “oxi” (no), telling harrowing stories of secretly delivering food through a basement window to her brothers and others, who were imprisoned by Nazi soldiers who occupied her hometown and house itself. She traveled to America by boat with her family and settled in Astoria, NY where she finished high school. After graduation, she worked at a watch band factory where she became the union representative. She loved telling the story of delivering bags of cash union dues to the bosses while wearing her “I Like Ike” button to their dismay. She loved liberty, freedom and her country proudly displaying stars and stripes wherever she could.

She married her husband, Fotis “Frank” Seretis and they owned and operated the popular, historic, Tom’s Diner (named after her father-in-law), located in Ledgewood, NJ, from 1958 to 2004 (46 years). She was the ‘meat & potatoes” chef in the kitchen, while Frank manned the front grill. Her famous customer favorite dishes included rice pudding, meatloaf, stuffed peppers and 40lb turkeys on special every Friday. Tom’s Diner won Runner-Up for Best Diner In NJ in an AOL/Cityguide poll their last year in operation as well as receiving a Historic Preservation Award from town officials. It was famously featured in Cyndi Lauper’s “Time After Time” video as well as numerous books. The friends she made there in 46 years were like extended family who continued to reach out during her last days.

She loved baseball and was a self proclaimed “Yankee Fanatic”. She was the “Team Mom” to all her son’s Little League baseball teams and always treated the team to hot dogs and hamburgers after the game, win or lose. Her favorite Yankees were Thurman Munson, Bernie Williams and Hideki Matsui. Several years ago she was diagnosed with Alzheimer’s Disease and Dementia and eventually entered a long term care facility.

Pauline is survived by her only child and son, Tom Seretis, daughter-in-law Deborah Seretis, two grandchildren, Fotis “Frank” and Alexandria Seretis, all of Succasunna, NJ, sister Harriet Koutsoyianis and brother-in-law, Dr. Michael Koutsoyianis of Flanders, NJ, sister Bessie Abdalas of Forest Hills, NY, along with several nieces and nephews. May she rest in eternal peace.

Vistation will be held on Wednesday, December 15, 2021, 10:30-11:30 with a service at 11:30 at St. Andrew Greek Orthodox Church. Interment to follow at Locust Hill Cemetery. Arrangemets by Tuttle Funeral Home. The family would like to expressly thank the Visiting Nurse Association, Alzheimer’s NJ and JFS of Northwest NJ for their at-home support and care

A Memorial Tree was planted for Pauline
We are deeply sorry for your loss ~ the staff at Tuttle Funeral Home
Join in honoring their life - plant a memorial tree
Services for Pauline Seretis
There are no events scheduled. You can still show your support by planting a tree in memory of Pauline Seretis.
Plant a tree in memory of Pauline
Print
Share A Memory
Plant a Tree