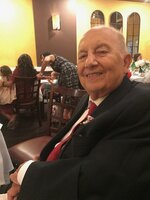 Elias was born on December 1, 1937, in a predominantly Greek community in Zagazik, Egypt.  His family fled Egypt for Greece for a better life, due to the persecution of the Christian community in Egypt at the time.  Elias later immigrated to the U.S. after graduating from the University of Cairo, Egypt and continued his studies as a CPA and far beyond.  He later met his wife Barbara Christos, who together became members of St. Nicholas Greek Orthodox Church in Newark and St. Andrews Greek Orthodox Church in Randolph, NJ.  Elias was known as a soft-spoken gentleman, and a shrewd intelligent businessman.  He served the local Greek community and was known as “The Diner Accountant”, where he would make house calls to people to accommodate them that had no means of travel to get to him.  After his wife Barbara became ill, he gave his Accounting Practice to a local Greek accountant that reminded him of himself along with the remainder of his clients that he kept close to him.  Luis also became a corporate executive and board member of Henry Brothers Electronics where he was responsible for taking the company public, one of 3 companies he brought to the New York Stock Exchange. He was very generous to his family in Greece buying them land, homes and cars, and was always generous to his friends as well.

He was an avid ping pong player, excellent backgammon player, loved to play poker with his friends, loved James Bond movies, loved billiards, and loved his wife Barbara and dog Muffy along with his best friends Takis and Soultana Seretis, who cared for him for the past 4 years when he became ill.

Elias’ mother was Irene Voskopoulos whose family was from Constantinople and fled there again due to the persecution of the Christian community there.  His father was Dr. Simeon Massad.  He was predeceased by both his parents, his wife Barbara in 2007, and his sister Marika in 2017.  He is survived by his sister Georgette Petrakis of Switzerland.

In lieu of flowers donation may be made in his memory to St. Andrew Greek Orthodox Church, 1447 Sussex Turnpike, Randolph, NJ 07869.