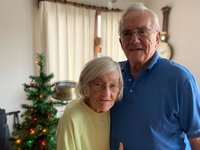 Loretta Joan Chirip (née Barna), 89, of Mine Hill and Beach Haven, NJ, peacefully passed away on the evening of January 6, 2021.

Loretta was born in Passaic, NJ on September 22, 1931 to parents Helen and George Barna. She spent her childhood travelling around the country as her father served in the United States Navy and they moved with every new assignment. Finally, they settled in Dover, NJ where Loretta graduated from Dover High School in 1948. She went on to graduate from Berkeley College and County College of Morris with degrees in Business Administration. Loretta worked for Warner Lambert as an executive administrative assistant until she retired.

On November 5, 1950, Loretta married the love of her life, Andrew P. Chirip. Andy and Loretta were never apart, save for the years that Andy served fighting in the Korean War as a Marine. They settled in Mine Hill, NJ, were happily married for 70 years, and had four sons together.

Even with the busyness that being a mother of four boys brings, Loretta was never seen without perfectly-coiffed hair, beautiful makeup, and manicured nails — often painted to match the shade of her lipstick. Loretta and Andy could often be found singing together, whether at home, at St. Mary’s church, or the many times they would entertain residents at nursing homes around the community or guests at the annual Chirip family parties. They also loved to travel and would spend their winters taking road trips to Florida. Always spending time with friends and family, new and old alike, along their annual pilgrimage to warmer weather. Loretta and Andy also made sure to take their sons, and later their grandchildren too, on plenty of family trips including an annual one to Pico Mountain in Vermont to ski. The happy couple even traveled to Ireland for their 50th Wedding Anniversary — a gift given to them by their family to serve as the dream honeymoon they never got to have after their wedding.

After retiring to Long Beach Island, NJ, Loretta and Andy enjoyed singing in the church choir, riding bikes, going to the beach, and sitting on the porch of their home together. Loretta was an avid Bocce Ball player for the “Bay Berries” team in Beach Haven, NJ and would happily regale you with stories of her triumphs. She was also a talented artist, home chef (of a variety of hard-to-pronounce Polish and Czech/Slovak dishes), seamstress, and household “accountant.” She was an appreciator of dessert (particularly Klondike Bars), avid reader, and knowledgeable in home remedies for any ailment, notably sunburn. A collector of photographs and stories, Loretta could talk with anyone for hours. She enjoyed opening her home and heart to everyone and she was a loving wife, mother, and grandmother.

Loretta is preceded in death by her parents and brother, George Barna. She is survived by her husband, Andy; sister, Eileen; her sons, Steven and his wife JoAnn, Andrew and his wife Jenny, James and his wife Heather, and Thomas and his partner Ellie; her grandchildren Danielle and her husband Kyle Miller, Kayla and her fiancée Michael Richards, Kyle, Joshua, and Rosalie; as well as extended family members Linda, Christine, Chase, Riley, and Cole, along with many nieces, nephews, and cousins.

All services are private.

The family plans to hold a celebration of life — a “Hay Lay To Heaven” — in her honor at a future date to be determined for the rest of those who wish to pay their respects. In lieu of flowers, donations can be made in her honor to Alzheimer’s New Jersey at www.ALZNJ.org.