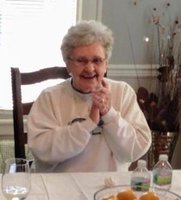 Agnes M. (Mimi) Broderick Mollahan passed away on May 20, 2020 surrounded by her family. She was 88 years old. She was born in Wilkes-Barre, PA and was the third of four daughters born to James and Agnes (Burke) Broderick. Mimi always put her family first and lived by her Catholic ideals. She was so very proud of her Irish heritage! She was employed at Bell Telephone of PA prior to her marriage. In June of 1957, she married her husband, Edward C. Mollahan. After raising her five children, she returned to work at the Morris County Board of Elections and then at the Morris County MUA for over 25 years. Mimi was predeceased by her husband, Edward, to whom she was married for 59 years and her son, Robert Mollahan (2006), as well as her sisters Marion, Joan, and Marguerite. She was the devoted mother of Kathleen Lytle (Anthony), Edward Mollahan (Monica), Thomas Mollahan (Micki) and Michael Mollahan (Janet). She loved her nine grandchildren Kristen Overstrom, Anthony Lytle, Katie Lytle, Deirdre Mollahan, Sean Mollahan, Madeline Mollahan, Meghan Mollahan, Caitlin Mollahan and Kelly Mollahan as well as seven great grandchildren. Donations in her name can be made to St. Jude’s Children’s Hospital. All arrangements by Tuttle Funeral Home, 272 Route 10, Randolph (www.tuttlefh.com).