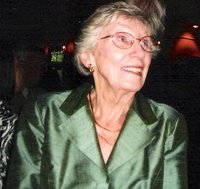 It is with great sadness that Audrey’s family shares that her journey with us has come to a peaceful end. After living her life thoroughly enjoying her family, friends, gardening, playing bridge with all her bridge friends of 50 years and attending Church, she is now resting with the love of her life, her husband, Donald L. Wilson Jr., as well as her parents, Henry T. and Lilian Macnair Smith. Audrey grew up in West Orange, NJ and moved to Randolph, NJ when she married in 1950. She and “Skip” lived out their remaining years in the home they built together and within which they raised their family. She became a member of the Dover Junior Women’s Club shortly after her marriage which provided her with new friends after moving from West Orange as a new bride to Randolph. From here she forged many life-long friendships. Her home in Dover Hills where she would reside for the rest of her life provided many lasting and evolving friendships and she truly felt at home there because of the many neighbors that became “part of her family.” She was a Class of 1948 graduate of West Orange High School after which she attended Berkeley Secretarial School. A lifelong learner, she returned to academia and graduated from College of St. Elizabeth in 1994. Audrey retired from Novartis Pharmaceuticals Corp. as the Fleet Manager in 1996. She was also nominated and confirmed by the Senate to serve as a member on the North Jersey Transit Corporation Advisory Committee where she served from 1996 to 2002. She was passionate about her church First Memorial Presbyterian Church of Dover and served many years in various positions including as an Elder, on the Board of Trustees, on the Stained Glass Committee and gave freely of her time on many fundraising committees. Audrey loved being a homemaker and approached running a household with the same efficiency and grace she applied to her job and to entertaining. She created a home that was at once an emporium for spirited conversation, festivity and comfort. Audrey’s parents were from England and when they married there were just the two of them in this country. Audrey would often look around at family gatherings in amazement at how large her family had become. She is survived by her daughters, Deborah Brien, Susan Wilson and Carol Langendoerfer and eight grand-children; Amanda and her husband Evan Thompson, Aymsley and her husband John Mahoney, Jason Felch, Keith and his wife Jackie Foster, Lauren and her husband Paul Sirignano, Megan Felch, Melinda and her husband Lane Tewes and Scott and his wife Kristi Brien. She is survived by nine great-grandchildren; Issac Thompson, Lucas Foster, Ronan Mahoney, Althea Sirignano, Emily and Benjamin Brien and Warner, Nolan and Logan Tewes. Audrey is also survived by her brother, Jeffrey T. Smith, his wife Sally, and many nieces and nephews. The family is especially grateful for many staff at BrightStar and to Atlantic Hospice, for the gift of sustaining us and Mom in her last days, and allowing us the joy of fulfilling our goal of keeping Mom in her home of 69 years. We were rewarded throughout the experience through the bonds of family and wonderful friends, without whom we would not have been successful. A Memorial Service will be held on Saturday, February 8th, 2020 at 11:00 am at First Memorial Presbyterian Church, 51 W. Blackwell St., Dover, NJ 07801 In lieu of flowers, donations may be made in Audrey’s honor to her church: First Memorial Presbyterian Church 51 West Blackwell Street Dover, NJ 07801 -OR- In support of children like her great-granddaughter Althea: Apert International Inc. PO Box 2571 Columbia SC 29202 803-732-2372 www.apert-international.org